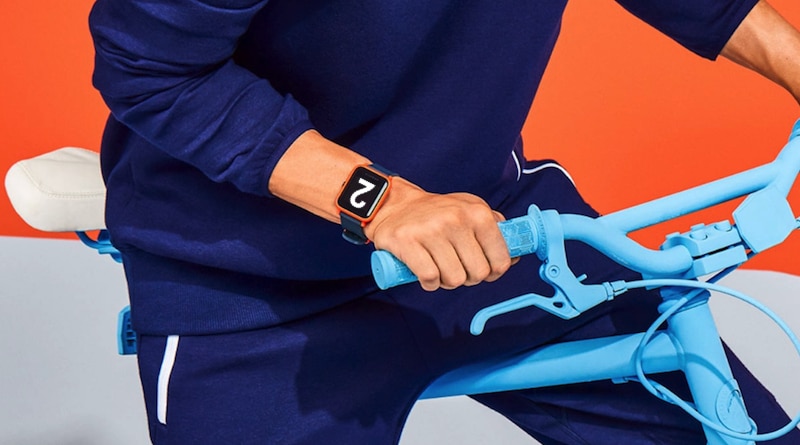 Update 11 February 2019: Amazfit Bip 2 can now be pre-ordered on GeekBuying. Read the full article on this link.

The Amazfit Bip 2 is just around the corner. The upcoming smartwatch has now received FCC certification and this has revealed some real-life images of the device.

The original Amazfit Bip is a low cost smartwatch with an impressive feature-set. It came out in 2017 jam-packed with features such as built-in GPS, a heart rate sensor and notifications. In addition to keeping tabs on your activity 24/7 the gizmo also provides tracking of your runs, cycling and other sports with mapped routes, detailed stats and heart rate zones.

But Bip’s claim to fame is its astonishing 30+ days of battery life, and that’s with an always on colour touch-screen! Choose the ‘minimal notification’ setting and battery life climbs to 45 days. Even with GPS switched you’ll get an impressive 22 hours of juice.

To some, all this might sound a bit too good to be true. Especially considering Bip sells for less than $100 on the company’s website (check price on Amazon).

In our review we note the device covers pretty much everything an average person needs for 24/7 activity tracking. Most important of all, it does this well and without any fuss. If you’re after a simple wearable that keeps tabs on your fitness, running and cycling (with GPS), the Bip makes a strong case for itself.

Its fair to expect all this and more from the second generation device.

While Amazfit Bip doesn’t look anywhere near as inexpensive as it actually is, and some have even categorised it as an Apple Watch lookalike. But there is room for improvement. The always-on screen does the job but the polycarbonate casing lets it down somewhat. Some more premium materials would go a long way towards making the wearable more attractive.

The display is rather small right now but it has big bezels all around. Huami, which produces the watch, would do well to take cue from Apple and eliminate the bezels. Better resolution and improved readability will also be nice.

Most new wearables these days are swim-proof. Amazfit Bip is rated IP68 which means its only splash-proof. A water-resistance rating of at least 3 ATM and swim tracking would represent a healthy upgrade.

One feature that is missing currently is floor count. Which is rather strange considering the wearable has an air pressure sensor (barometer for elevation). It should not be too much of a problem for Amazfit to slap this on.

Our review also notes the lack of sports Amazfit Bip tracks and that the non-fitness features pretty much end with notification support. All this has room for improvement. NFC for payments and offline storage for music are the first to spring to mind. A few Firstbeat performance metrics would not hurt either.

Of course, Huami will need to be careful not to sacrifice too much battery life for any added features as this is an important selling point. The other attraction is the price. This is a budget smartwatch and Huami will probably want to keep it this way.

So what do we actually know?

The new FCC filing is dated December 29th which indicates the second iteration will soon go to market. In addition to images which you can see below, the paperwork reveals a 5 ATM water-resistance rating and a 200mAh battery (bumped up from 190mAh in the original version). 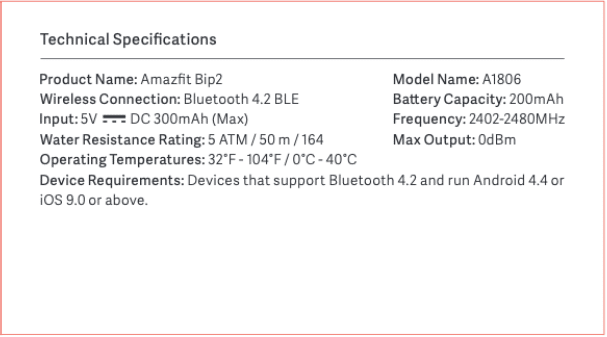 The FCC images show the design has been kept largely the same, so much so that the new wearable is hardly distinguishable from the old one. The only differences are a slight redesign of the single physical button on the right, and that Bip 2 is slightly narrower than its predecessor whilst retaining the same screen size. 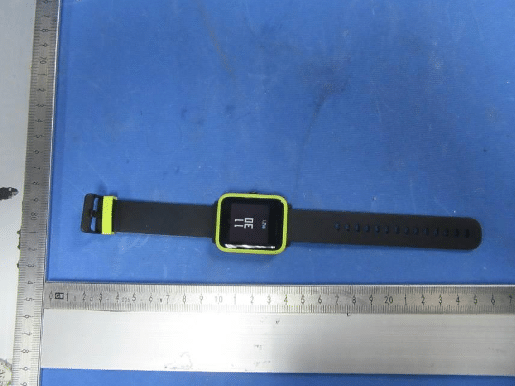 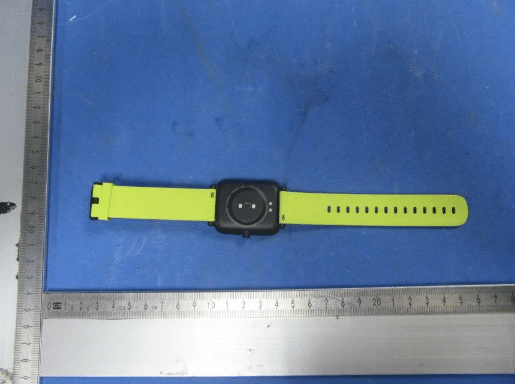 You can even read through the manual.

Some other info was spotted by AndroidTR in the MiFit application development code a couple of months ago. This is where they found the reference “DongTingHu”. Subsequent analysis of the code revealed that the name refers to the Amazfit Bip 2.

A few interesting titbits were uncovered in the code. The wearable will come with a Sony GPS chip, accelerometer, heart rate sensor, compass and NFC. There is also mention of a “Sport” mode.

Amazfit Bip 2 will also have internal memory like the Pace and Stratos models. It is not clear yet whether this will be available for offline music storage or just auxiliary functions such as storage of watch faces.

Some were expecting we would see Amazfit Bip 2 at Huami’s three year anniversary in September, but this was always going to be a stretch. The wearable was released in China in 2017 and only made it across the border in early 2018. Instead Huami chose to release the Amazfit Verge and Health Band 1S at its all important gathering.

A CES 2019 reveal is a distinct possibility, but our guess is that spring of 2019 looks more likely. This will likely be a budget smartwatch so expect the price again to be around the $100 mark.

All things considered, it looks like the Bip 2 is not going to be a big upgrade. The info so far has revealed a slightly tweaked design, slightly higher capacity battery, much better water-proofing and perhaps NFC and offline storage for music.

31 thoughts on “Amazfit Bip 2 gets FCC certification: here’s what to expect”