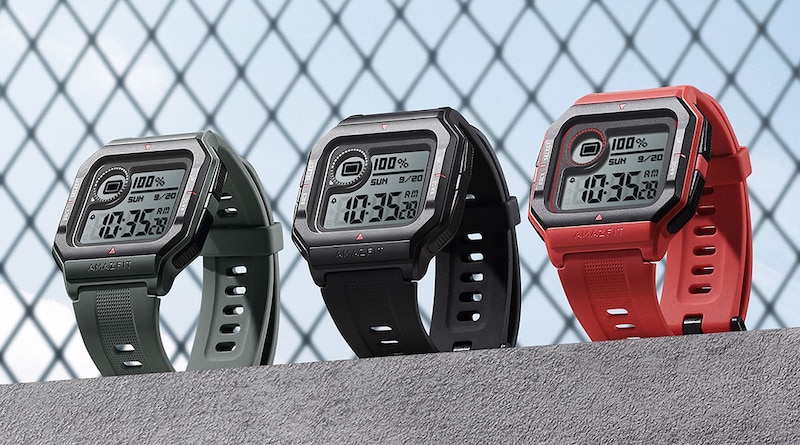 The Huami Amazfit Neo watch is up for pre-sale on AliExpress. The sub $50 dollar device comes with a rather odd retro look.

We knew Neo was about to be released as some details on the watch were revealed in the code of the Amazfit (now Zepp) app. It’s name appeared alongside GTR 2 and GTS 2 details of which we are still yet to find out. But it probably won’t be long before they are officially unveiled – quite possibly next week at IFA in Berlin.

Neo is a one-off or a beginning of a new line. The main news here is the design, the rest is pretty much standard stuff.

The device adopts a four-sided screen which gives it a rather retro look. In fact, Neo reminds very much of Amazfit Ares. This is a $70 sports watch that Huami launched in May this year.

Neo comes with a 1.2 inch STN black and white display that does not eat up too much battery life so is always on. Lifting your wrist will activate a backlight which makes it very readable, even in bright sunny conditions.

The screen resides inside a 40.3 x 41 x 11.7mm plastic case that is attached to a 20mm band. The choice of build materials means the whole thing weighs just 32 grams.

There are four buttons along the sides. The two on the left are used for powering on/off and turning the backlight on/off. The ones on the right let you navigate up or down through the screens.

Under the hood is the standard gamut of fitness tracking sensors including an accelerometer and Huami’s PPG biotracking optical heart rate sensor. The latter will provide abnormal heart rate alerts. Other than that you get info on steps, calories, PAI and sleep, along with running, cycling and walking modes.

An important selling point of the 5 ATM rated watch is battery life. The 160mAh battery will keep going for up to 28 days on a single charge, and that’s with the display always on. This goes up to 37 days with the power-saving mode.

And that’s pretty much it. We’re not really sure who the watch is aimed for but Huami believes there’s a market for it.

A good selling point is the price. Neo is currently listed at a price of $49.99 on Aliexpress which is cheaper than most decent fitness bands. If you use the promo code “AMAZFITNEO”, you can shave another $8 off the price.